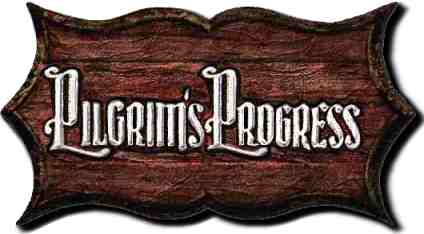 Complete- includes both Part 1 and Part 2.

(Go to the Contents or Introduction).

John Bunyan's dream, written from a prison cell, has become the most famous allegory in English literature.
Written almost three hundred fifty years ago, this book has been read in prim parlors,
in sophisticated drawing rooms, in royal households, in religion classes, in schoolrooms,
in family worship- and still it is read by all those who, too, would be a pilgrim.

FROM THIS WORLD TO THAT WHICH IS TO COME;
DELIVERED UNDER THE SIMILTUDE OF A DREAM.

Timeline History of "The Pilgrim's Progress"*

1675 (at age 47)
John Bunyan wrote "The Pilgrim's Progress" during six months of incarceration.

1678 (at age 50, approximate)
Bunyan's second edition of "The Pilgrim's Progress" published in the autumn.

Part 1. of this copy has been updated to modern English for the purpose of making it more readable for those like myself.

THE SECOND STAGE.
The Gate - conversation with Good-Will - the Interpreter's House - Christian entertained - the sights there shown him

THE THIRD STAGE.
Loses his burden at the Cross - Simple, Sloth, Presumption, Formalist, Hypocrisy - hill Difficulty - the Arbor - misses his roll - the palace Beautiful - the lions - talk with Discretion, Piety, Prudence, and Charity - wonders shown to Christian - he is armed

THE FOURTH STAGE.
Valley of Humiliation - conflict with Apollyon - Valley of the Shadow of Death - Giants Pope and Pagan

THE SEVENTH STAGE.
Christian and Hopeful - By-ends and his companions - plain of Ease - Lucre-hill - Demas - the River of Life - Vain - Confidence - Giant Despair - the Pilgrims beaten - the Dungeon - the Key of Promise

THE EIGHTH STAGE.
The Delectable Mountains - entertained by the Shepherds - a by-way to Hell

THE NINTH STAGE.
Christian and Hopeful meet Ignorance - Turn-away - Little-Faith - the Flatterer - the net - chastised by a Shining One - Atheist - Enchanted Ground - Hopeful's account of his conversion - discourse of Christian and Ignorance

Part 2. Original - not yet modernised

THE FIRST STAGE.
Author's Apology for the Second Part - Christiana and Mercy - Slough of Despond - knocking at the gate - the Dog - talk between the Pilgrims

THE SECOND STAGE.
The Devil's garden - two ill-favoured ones assault them - the Reliever - entertainment at the Interpreter's house - the Significant Rooms - Christiana and Mercy's experience

THE THIRD STAGE.
Accompanied by Great-Heart - the Cross - justified by Christ - Sloth and his companions hung - the hill Difficulty - the Arbor

THE FIFTH STAGE.
Valley of Humiliation - Valley of the Shadow of Death - Giant Maul slain

THE EIGHTH STAGE.
Valiant-for-Truth's-Victory - his talk with Great- Heart - the Enchanted Ground - Heedless and Too-bold - Mr. Stand-fast - Madam Bubble's temptations - the land of Beulah - Christiana summoned - her parting addresses - she passes the River - she is followed by Ready-to-halt, Feeble-mind, Despondency and his daughter, Honest, Valiant, Steadfast - Author's Farewell